Things to do in Rhodes

Whether you want to trek through wooded valleys, soak up the Mediterranean sunshine on the beach or explore ancient towns, you'll never be short of things to do in Rhodes. During the day, you can hit all the major sights and attractions including ancient towns and pristine golden beaches. At night, music rings through the town as the local pubs and clubs come alive and welcome you to the party. But, with so much to see and do, it's difficult to know how to spend your time during your stay, which is why we've come up with this handy guide to help you make the most out of your holiday to Rhodes.

One of the first things you should do when you visit Rhodes is to explore the island and get a taste of what you want to do during your stay. You can hire a car and go offthebeatentrack to uncover hidden coves and places where the crowds have yet to explore. You could even hop on a boat and sail to neighbouring destinations such as Marmaris in Turkey or the picturesque island of Symi. If you're a night owl, you'll feel right at home over at the Faliraki resort, which is known for its lively nightlife scene. Hit all the best bars and clubs and dance the night away following a relaxing day soaking up the Mediterranean sunshine on the beach. In Rhodes, things to do will depend on your personal taste. If partying isn't your thing, you'll probably prefer a quiet meal in one of the many Greek restaurants on the island or even indulge in a romantic picnic over at St Paul's Bay. Here, you can snorkel and explore the colourful marine life and practice windsurfing along the coast. Or, simply sit back, relax and marvel at the stunning views boasting rocky cliffs, turquoise waters and golden sands.

Grab your camera and prepare to snap lots of panoramic shots as you journey to the Monastery Tsambika, which offers breathtaking views over the coast of Tsambika and Kolymbia. You'll have to climb 350 steps to reach the Byzantine church, which lies 25km south of Rhodes Town. Some more great places to visit in Rhodes include the Archaeological Museum, which is home to ancient treasures spanning 7000 years. Explore what was once a Knight's Hospital in the 15th century and discover marble statues, historical artefacts and more during your visit. While you're in Rhodes Town, stop by the 7th century Roloi Clock Tower and enjoy a refreshing beverage overlooking the surrounding buildings.

You'll find most of the main attractions in Rhodes over at the Knights' Quarter, which is where the Knights of St John called home in the 14th century. Make your way through the Street of the Knights and head to the Palace of the Grand Master, which is a historical building established by the Knights Hospitaller. Explore inside its mystical chambers and check out the different exhibits and artwork on display inside the castle. Another must-see attraction in Rhodes is the Colossus of Rhodes, a statue of Helios, an ancient Greek sun-god. The statue is known as one of the Seven Wonders of the Ancient World and you can view what remains during your visit. While in Rhodes, make sure you don't miss the opportunity to climb to the top of the Acropolis of Lindos. Meander through ancient white columns and explore the historical remains of the Temple of Athena Lindia. Before you leave, spend some time exploring the cobbled streets of Lindos, which is a traditional Greek village known for its historical buildings, glorious sandy beaches, and romantic charm.

There's a lot of amazing places to see in Rhodes but one that's often overlooked is Petaloudes, a spectacular forest over on the western part of the island. It's also known as the Valley of the Butterflies, and if you visit in summer, you'll get to see hundreds of them fluttering around the forest. Take the forest path and let it guide you through tranquil streams and peaceful pools as you take in the beautiful views and enjoy the warm sunshine on your skin. Escape the tourists over in Filerimos, a small town coated with pine and cedar trees, epic views of the Aegean Sea and home to a medieval monastery overlooking the bay. To reach the Monastery of Filerimos, take the winding road to the top of the hill. From there, you can begin your exploration of the early Christian basilica and the smaller Byzantine church, which offers a peek into the history of the area.
18 Things to do 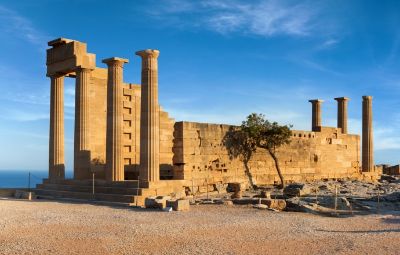 Lindos, with its famous Acropolis, is one of the most popular villages on Rhodes and it's impossible not to fall in love with its traditional ...
Find out more 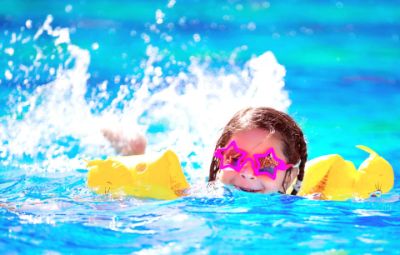 If you're heading off on a family holiday to Rhodes, you won't have to worry about keeping the little ones occupied. This island has ...
Find out more 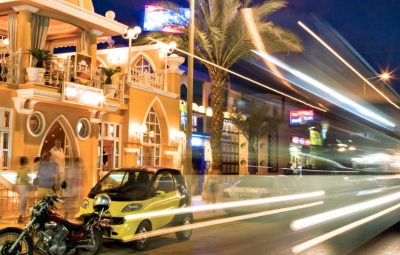 On an island of contrasts, Rhodes' nightlife can take you from lively and raucous to chilled and romantic in the space of a single evening.
Find out more 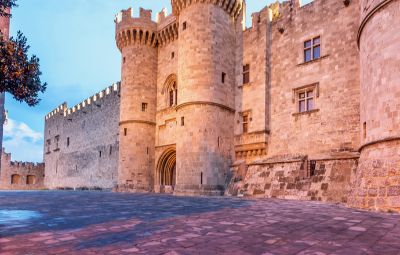 Palace of the Grand Master of the Knights of Rhodes

History buffs will feel like they've hit the archaeological jackpot when they explore the medieval Palace of the Grand Master of the Knights ...
Find out more 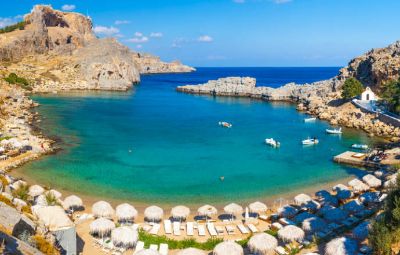 Lindos is home to some of Rhodes' most beautiful beaches and it's easy to see why they're so popular with both the locals and tourists.
Find out more 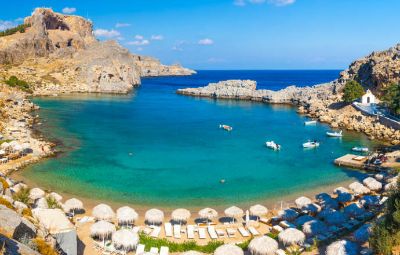 Hire a car or take a boat trip, and discover one of the most picturesque beaches on the entire island of Rhodes; St Paul's Bay. As you ...
Find out more 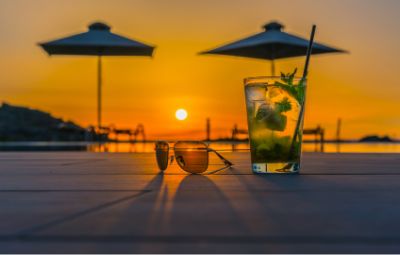 This may be a small town, but nightlife in Lindos has plenty to offer. During the day, the pretty town of Lindos keeps up a traditional ...
Find out more 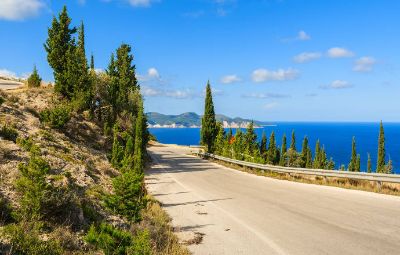 Hire a car and explore the island

There's so much to see and do on the island of Rhodes and with a car you're able to escape the crowds and find undiscovered corners and ...
Find out more 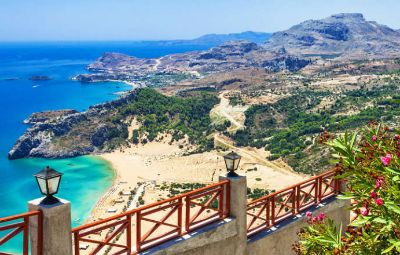 Discover panoramic views and a captivating local legend as you climb up to Monastery Tsambika. This small Byzantine church is located between ...
Find out more 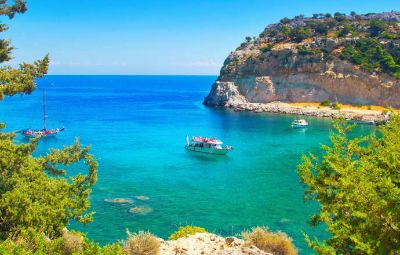 The resort of Faliraki is the life and soul of Rhodes, with something to suit every type of holidaymaker thanks to its diverse range of ...
Find out more 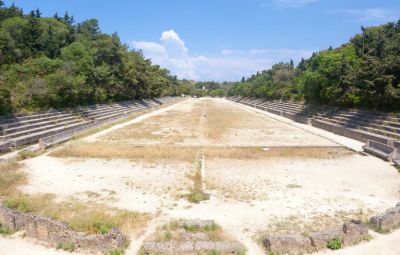 Sport wasn't just a pastime to the ancient Greeks. It was a way of life, a definition of their cultural identity, and the chance for a really ...
Find out more

Whilst on holiday in Greece, you can even take a trip to another country entirely. How does Turkey sound? Not many people can say that they popped ...
Find out more 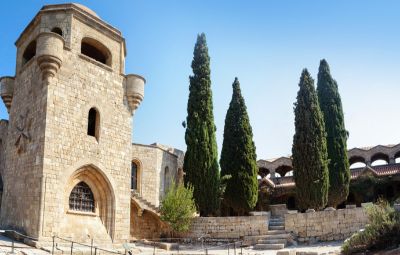 The Monastery of Filerimos

You'll find Filerimos Monastery on the west coast of the island, just eight miles from Rhodes Town. The monastery is nestled on a hill ...
Find out more

The Greek island of Rhodes is surrounded by the Aegean Sea and the Mediterranean. If you fancy heading out onto the water, make sure you add ...
Find out more 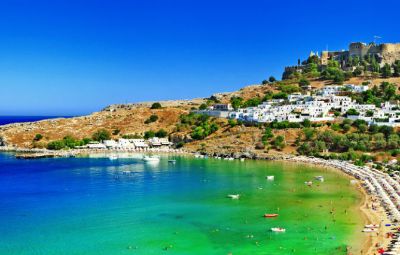 Stroll around the village

The historic village itself is the main attraction in Lindos. Surrounded by whitewashed buildings and old churches,
Find out more 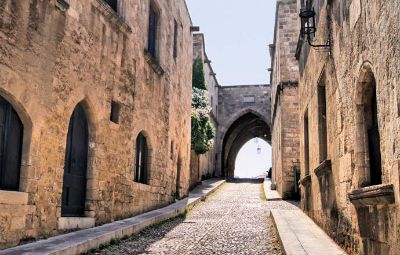 You'll find copious amounts of traditional Greek tavernas and inns within the walls ” perfect for watching the world go by. But ...
Find out more 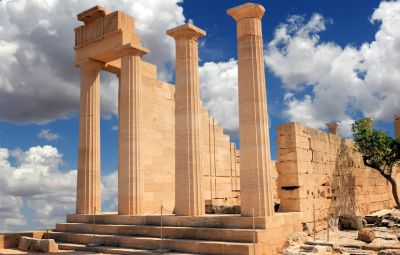 A holiday to Lindos wouldn't be complete without a visit to the ancient Acropolis, built on a hill top 100 metres above the main village. ...
Find out more 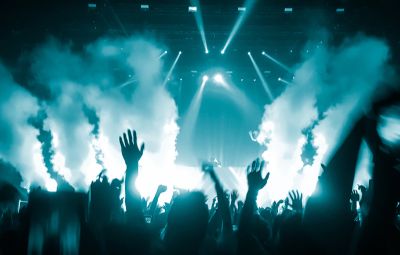 When you're finished sightseeing and the sun sets over the horizon, grab your pals and embrace the exciting nightlife in Faliraki. The seaside ...
Find out more