This modern, attractive hotel is situated right on the coast just a two minute stroll from the centre of popular resort town Marmaris. Visitors can take an excursion to Marmaris' castle and national park to observe a varied and colourful landscape and sunbathe at quiet, pristine beaches. The park is also the site of two ancient cities, Physkos and Amos, where visitors can see the ruins of an ancient temple, theatre and city walls that date back to the Hellenistic age. Alternatively, guests may simply lounge by the shimmering hotel pool and enjoy a snack or a refreshing drink from the pool bar, or luxuriate in a massage in the fitness centre complete with sauna and steam room. Rooms are comfortable with air conditioning and private balcony with sea or mountain views, and the hotel restaurant offers delicious international cuisine for breakfast and dinner. The ideal place for fun in the sun where the Aegean meets the Mediterranean. 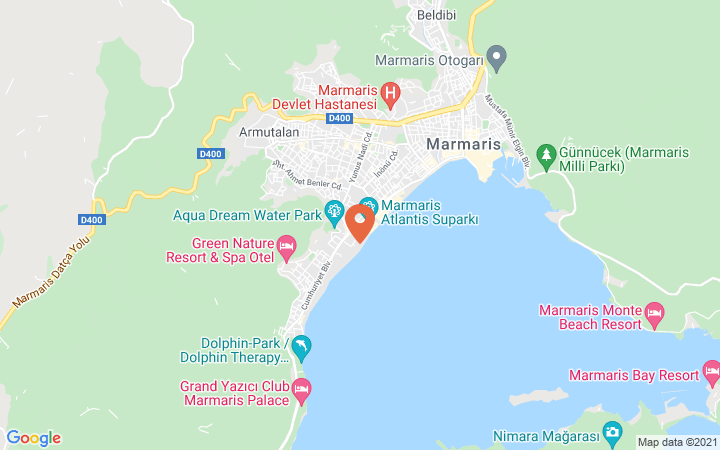 Overall okay and we enjoyed our stay

This hotel actually exceeded my expectations when I read the previous reviews. Let me start off by saying although there are guests from the UK it is not aimed at UK guests. The staff. The majority of the hotel were absolutely lovely and really pleasant, with the exception of two staff members. The first being the man that deals with the spa. He was rude after we had said we were not going for the spa, barged into me a few days later and really made me feel uncomfortable when going in to pick up or return beach towels. The second was the animations guy. He was rude to the point of going around and interacting with all guests in the pool area except from the uk guests, and this really made me feel like we were not welcome, now I understand we get a bad reputation on a whole but to judge every guest the same is uncalled for. There was several days that I was at the pool on my own due to my partner having an infection on his leg and having to keep out of the water on advice from the doctor and it would have been good to have been able to be involved in what little activity there was. However the bar/pool man Jimmy always checked in on everyone to make sure they had what they needed throughout the day and that made up for it. Continuing with the animations, there was literally nothing going on what looked like a stretching class at 10:30 am and I think there was table tennis in the afternoon however the animations guy didn’t inform where it was. The music was the same repeated several times throughout the day to the point I could recognise different Turkish songs and it must just be a playlist that he had on repeat. The staff mentioned would really have put me off going back and it would have been a completely different review if it wasn’t for the niceness of the rest of the staff The rooms and housekeeping. Although small the rooms were clean, when we went in, I can’t comment on the housekeeping team as I tended to clean my room down each morning and was able to source fresh bedding/towels/toilet paper from them, however they were there cleaning rooms and public areas everyday and from what I could see everything was clean. The bedding itself would have been better if it was a flat sheet instead of the blankets we were given. The food and drink The food itself seemed fresh everyday and yes it was quite repetitive but there was always something you could eat. As mentioned by others the times are quite strictly set but there was literally always food available. Breakfast was a massive variety of fresh veg and fruit, there were cereals, breads, pancakes, I definitely seen fried eggs most days but it was continental style no fry ups, but you wouldn’t go hungry. You could make toasties etc in the morning too. There was late morning snacks at the pool bar, burgers, chips, chicken nuggets, not the best tasting so I ably tried them once. Lunch there was always a soup, pure, warm pasta, chips, a protein, rice, a stew/casserole, plain chicken, and a massive amount of veg, meze, cold pasta, salad, and cakes, dinner was pretty similar, I found it fresh and I’m sure most people would find something to eat there, we did go out to eat 4 of the nights during our week and we unfortunately missed the Turkish night due to it being a Friday (our travel days) there was a late night soup but I didn’t try the soup at any point. The drinks were basic, they did have a cocktail list that was included in your all inclusive package, but the alcohol was local none branded spirits that honestly all tasted like whiskey. Who knows what was really being served, but it’s what happens in most all inclusive hotels according to reviews I’ve read on other hotels, there was branded spirits locked in a fridge however we were not allowed these. Anyway the drink done the job and got you drunk. The hotel was situated right on the beach and they kept on top of the cleaning each night, my only issue again was trying to get a sun lounger as everyone ran down first thing to secure their lounger and then turned up hours later, the one time I done this my towels got removed but I was alright if I had shoes, bags, sun cream laying about they were safe. I would recommend the hotel if you don’t mind a base to relax and just kick back, which suited us, however if you are looking for a hotel that is catering to uk guests with loads of entertainment or are fussy about getting a fry up or British food go elsewhere cause this place is not for you.

Hotel and staff are amazing

Recently back from Marmaris where I stayed at the Poisedon hotel . Location wise is great right on the beach however this hotel is not a 4* . I found the housekeeping work extremely bad . I didn't have my room or bathroom clean during my 9 days stayed. Basically they only changed towels . Bed linen is not a thing. Perhaps they do not use sheets? Only a fitted one and a white cover . Ah and my room was the tiniest ever ! Staff waiters are quite pleasant wherever you go although the breakfast staff early in the morning are not . I found odd not having fried eggs or fruit for breakfast. You can potentially ask but the chef is not very happy with it . Instead he prefers to cook pancakes all morning. Generally talking food at this hotel isn't very varied. Basically is the same old same . I have to admit that they have a good selection of chesse and salad. During the mail meals we can find delicious cakes too . They also have in the afternoon times for cake and fruit in the outside bar . But don't expect too much. Especially the fruits. Only will include a slice of watermelon and half orange. Overall for what I paid and I get from this holidays at Poisedon I do not recommend . Ah and if you a fan of swimming pools.... don't bother because is the smallest pool I have seen in my life

From £39pp with no hidden fees