Conveniently situated directly on the seafront, this hotel perfectly lives up to its name, offering accommodation in a very elegant atmosphere. The city centre of Marmaris with its shopping opportunities, entertainment venues and nightlife spots as well as the marina is within easy reach and Dalaman International Airport is 95 km away. The exquisite rooms have a contemporary European style and are very well-appointed with satellite TV, air-conditioning, minibar and a private bathroom. Guests can enjoy the sandy beach with a fancy pier or one of the two wonderful outdoor pools. Features include a first-class spa and wellness area and the sophisticated, fully-equipped Life Athletic Club. A wide variety of water sports is available, as well as some shopping facilities. At night, guests will be entertained by professional shows, including Turkish folkloric shows. A fashionable hotel to spend beach holidays in elegant surroundings.

Please note that the hot tub and steam room will not be available during pandemic.

This hotel is popular! Rated very good by 1281 people on Tripadvisor

from £33 per person per night 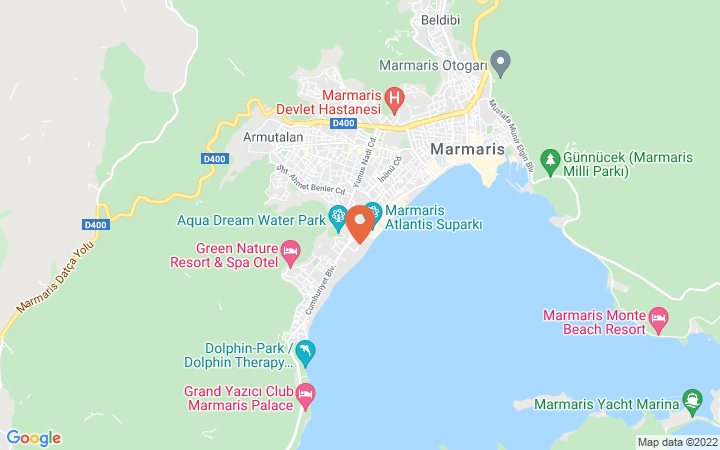 This is a very poor hotel for Turkish 5* standards. We would rate this 3 star maximum and that is us being generous. Rooms: Basic but clean. Hairdryer poor. The toiletries/shampoo/conditioner etc are dreadful. Food: We found it a very poor food offering. People using fingers for bread rolls/toast, no tongs. The tables were literally not cleaned. We were expected to sit to dirty tables with dirty placemats. Service was appalling. The young lady on the door was kind. Drinks: The all inclusive drinks offer is dreadful! They don’t serve any rum on all inclusive. The Pina colada is made with WHISKY! God forbid you have an allergy. I ordered a rum and coke and was told it was rum and coke. It was whisky. When we challenged it the bartender said it is whisky rum! Ridiculous! Decor: It is such a dated hotel. Orange and brown and very 1980s. Sofas sand chairs in the lounge are very tired looking. Pools; The quiet pool is lovely. Very peaceful and we enjoyed sitting there. We didn’t use the front pool. The jety is lovely but impossible to get a sun bed as people reserve them from 7am and leave their towels there all day. Very selfish. Water sports: We chose this hotel as a water sports place. The water sports were totally closed because of an “incident.” That is all we were told. Noise; The hotel is in an incredibly noisy area of the strip and we couldn’t go to sleep until at least life night every night. This hotel is no way a 5*. We do not recommend it and we’re so dissapointed. Like the previous reviewer we were TOLD to write a negative review on trip advisor but reception. How bizzare! Turkish 5* hotels are usually amazing and we sincerely regret staying here. However yoh live and learn!

What No One Tells You About This Hotel.

Lovely hotel with really great food and helpful staff. Well positioned on promenade and beach. Two good pools and beach with sun loungers on pier as well. Would easily get five stars if not for the extremely loud disco music belting out between eight and twelve. No chance of speaking to fellow guests. No chance of sleeping until music stops. What a pity.

More choice and flexibility for your dream holiday