Crystal Admiral Resort Suites and Spa is perfectly located for both business and leisure guests in Manavgat. The property features a wide range of facilities to make your stay a pleasant experience. Gift/souvenir shop, 24-hour front desk, room service, babysitting, car hire are on the list of things guests can enjoy. Comfortable guestrooms ensure a good night's sleep with some rooms featuring facilities such as carpeting, sofa, whirlpool bathtub, air conditioning, heating. Entertain the hotel's recreational facilities, including bowling alley, dart board, water park, wind surfing, hot tub. A welcoming atmosphere and excellent service are what you can expect during your stay at Crystal Admiral Resort Suites and Spa.

This hotel is popular! Rated excellent by 4508 people on Tripadvisor 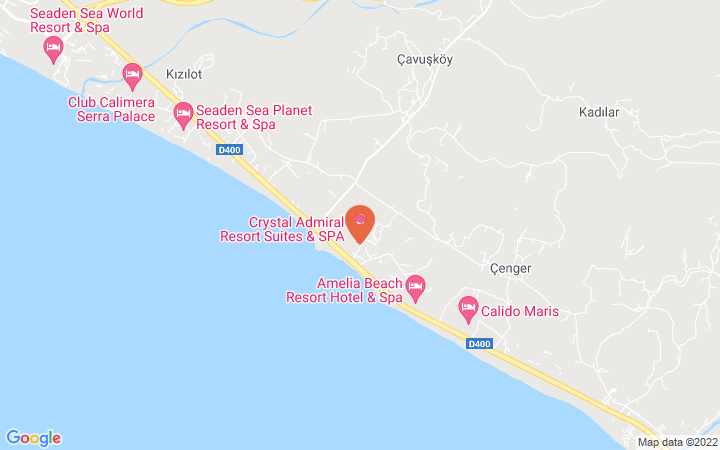 We travelled as a family of 4, children aged 5 and 9. Waterpark was great for children and ice cream and plenty of food for fussy kids. fresh pancakes at breakfast, eggs etc all available in the main restaurant. Nuggets pizza and chips available from the snack bar. We never went hungry. Check in process and out process was fine. The AC in our room did not work well and as it was over 40 degrees this was a real concern. The sink was broken when we arrived so we requested a change to the room on the second night and this was done with minimal issue. Disappointing that they thought it was ok to rent the room out in the fist place though. The AC's overall were old and made a lot of noise. No AC in the central areas like lobbys or hotel reception, or atleast it doesn't feel like there is. Noise: our first room was poolside and really close to where the late evening entertainment was held so was really loud for our children and they struggled to sleep until it was over around midnight. However, when we changed our room we were further away from this so the room change was a blessing. Not all staff speak English and can be dismissive. WIFI was sketchy in food areas but ok in the room. rooms looked ok but were outdated. I have stayed in more modern 3* places and this was supposed to be 5*. Maintenance needed in terms of broken pool tiles. Pools: kids pools were always busy but you could find a spot for everyone. there were not many lifeguards but the ones that were near the kids pools were very rude. Cleaning: housekeeping staff were great and the hotel grounds and rooms were always cleaned throughout the day. Mini bar filled daily really early but make sure you put do not disturb sign out otherwise they will come straight in. Staff were nice overall but seemed to cater to Russian clientele rather than Brits. Entertainment: this is daily but again not catered to any English tourists. Kids entertainment was nice was a small play area for the kids. Spa: Hammam was enjoyable and has to be done in the first days. Beach: is close by and there is a nice snack bar there but the beach is very sharp and pebbly so make sure you take crocs or aqua shoes. We booked some excursions through the English speaking rep. The pirate ship in Alanya was great- the transport there was a really old coach but the driver was lovely and the AC was strong. On the other hand we also booked a visit to the land of legends for the light show, that was a total waste of time, get your own taxi there from outside the hotel. The driver of the minibus was rude and expected us to put the children on laps when we had paid for a seat. When we arrived he explained through actions that we had to return to a certain point by 11 or he would be leaving without us. once in, we found the information desk and were told that the light show was not taking place due to it being some type of national day, the agent should have known this as we explicitly told him we were only going for the light show. The boat rides on that day were also cancelled due to the national day as they were doing a boat parade and all passengers in the mini-coach had the same view. On the way back the driver again made an issue of the children on seats and ended up walking out of the coach in a huff and refused to drive back. He did take us back but was very moody the whole way. I would not recommend this to anyone. Outside of the hotel there is nothing close by but you can get a bus to local markets from near the beach which we didn't know until the last day.

7adults & 8 children went to this hotel Never again. Was supposed to be 5 star lucky if its a one. Rude unhelpful staff. Couldn't get a sunbed as reserved with towels.. Restaurant so busy not enough seats Had many issues aircon fridge not working never got fixed. Room not cleaned properly. Even after many complaints things not sorted. Advertised as a sandy beach.. Was full of stones Avoid this hotel at all costs.

Misleading Hotel, poor all round, not 5 star.

We stayed during UK October half term as a family of four, with two other families forming part of our group. The hotel looks incredible on paper but there are some serious flaws: - Having booked direct with the hotel, we were given free transfers to and from the airport. None of them turned up. A taxi from Antalya was 60 Euros each way. We tried calling and emailing the main email but these were only picked up after we landed, and they haven't helped us one bit. The hotel reception say its not them, its the main Crystal group! - Having upgraded to Seaview room and booking for 2 adults and 2 children, we were greeted with a room that only had one double bed, and one single - leaving us a single bed short for one child! The hotel decided to convert one of the single chair into a makeshift bed. After much protesting as it really wasn't suitable, and the reception staff refusing to see the problem, we paid extra money to upgrade to a family suite so our child could have a "proper" bed. - The family suite is over two floors (one double upstairs, two singles downstairs), and whilst nice is not practical for children under 5 with its floating stairs. It's an accident waiting to happen. The beds were changed each day. - Any room facing the pool is also subject to the very loud disco that goes on everynight until 11.15pm / 11.30pm - it's horrific and you struggle to sleep. - The Kids club runs from 10.30am - 10.30 pm (yes, you read that right!) with evening kids entertainment every evening in the amphitheatre from 8.30 pm. The place stank every night of raw sewage and the entertainment for the kids was OK. You could see there was a culture of some parents dropping the kids off all day as they got smashed round the pool. - The food is very poor, and can be best described as a canteen. It's heavily catered for Russians who stay there (circa 75% of the hotel). three of our party were ill during they stay with sickness / tummy bugs. The snack bars we utilised more given it looked and tasted fresher. - You are entitled to eat at the al a carte restaurants but 3 out of the 5 were shut. We tried the mexican but it took over 2 hours to serve us and the food was freezing cold when it arrived. We ended up going to "the canteen" for the kids as they couldn't wait that long. - Be aware if you go in October the resort is on shut down mode, they ran out of lots of things throughout the week, including donuts, certain ice cream, tonic, rum, etc. All requests were met with curt staff saying "no not until 2023"!! By the end of the holiday they had packed up 50% of the sunbeds and were busily working around everyone throughout the day, loading them onto pallet trucks, etc. - The pools and water park look fantastic, but none are heated (even the indoor pool). only a hardy few could be seen trying them for 5 minutes. it was 27/28 degrees all week and it never got any warmer. We had 6 kids in our party and not one of them got in the pools which is a massive shame as they were huge, but they went on the slides later in the day. - The hotel have ping pong and a tennis court, both of which we never tried as each time we asked, the animation team bluntly told us they'd given out the bats and they hadn't been returned (there was no deposit to pay, no name taken). It was rather funny seeing some guests use phones as bats to play ping pong such was the dire situation. A Russian contingent of circa 12 also used the tennis court every day to do MMA training and took the nets down on the tennis court - I think the hotel didn't fancy the argument (nor did I to be honest!) - The reception staff are incredibly curt, and either don't understand, don't want to understand or can't be bothered. A special shout out to the regular chap with glasses who was awful and couldn't care. we gave up in the end asking about anything. I've also tried phoning the main Crystal Admiral numbers but they don't pick up, say its another number, or change their whatsapp group without warning (don't try and communicate via whatsapp with them, it's painful). - The Beach area we found to be the best and did that most days (the sea being warmer than the pool for the kids). The beach is a shingle style beach so take some beach shoes for the kids feet. We did Jet Ski's, Parasailing and the boat ride to see the turtles, all of which we loved and worth the extra money. - With cabin fever setting in and in need of some decent food, we took two trips to Side which was a complete punt - I can't recommend Side enough. It was 40 euros each way in a taxi and was stunning, You are dropped off in the main car park where you can either walk through the ruins to the pedestrianised town, or take the tourist train for 30 lire each. The architecture is incredible, with lots of nice shops and great restaurants. There are also other boat trips you can do from here down at the harbour. You won't be disappointed if you go. Overall, this is a 3 star resort at best and I won't be recommending Crystal resorts to anyone in the future. Don't book direct with the resort, you'll get ripped off with the transfers and have to pay in a taxi from the airport, which is stressful after travelling, especially if you have kids.