This impressive hotel is built on a spacious 1,410,000sqm of land directly on a Blue Flag beach and behind 2 professional golf courses on Turkey's Mediterranean Coast. The small town of Belek is approximately 3 km from the hotel while the large city of Antalya and its' old quarter, Kaleici is 45 km and easily reached by public transport which runs in front of the hotel entrance. Suitable for all ages, the resort hotel has a wealth of excellent facilities, including an Entertainment World & Amusement Park, 2 professional football pitches, an all-day food court and private pier and beach pavilions. Additionally, there is a large convention centre featuring state of the art technology. The elegantly furnished rooms are decorated in muted tones with swim-up rooms in a contemporary style and with bright white and turquoise decor.

This hotel is popular! Rated excellent by 5857 people on Tripadvisor 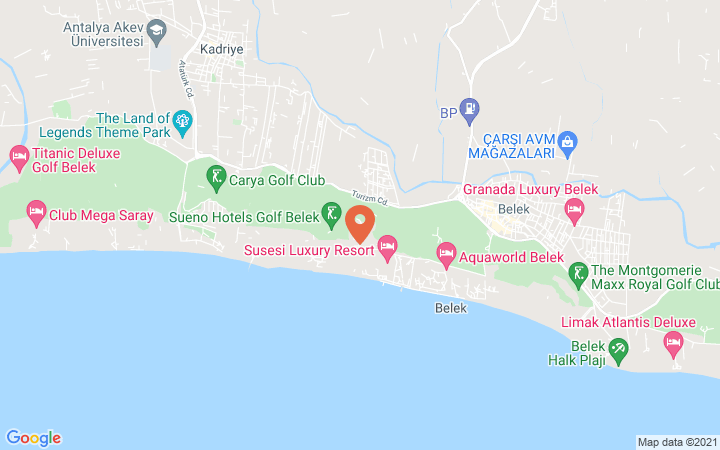 Great hotel for golfing holiday. Can't fault it. Only problem we had was the weather. Rain for half of the week but it was a chance we took at this time of year. The rooms were spacious with plenty toiletries etc. Also minibar and tea and coffee replenished daily. Excellent choice of food at every meal time. Indoor pool was lovely and warm.

Loud partying until 3am most nights, poor sound insulation, no-aircon at all, delapidated rooms

Rooms and sleep: Hotel reception is designed to impress with a large atrium , however this is a design flaw, the noise from the bar on the ground floor, echoes all the way up to the top like a Theatre. Ito all the the rooms. The first night we checked in as a family of 4 , our room was on the 6th floor overlooking the lobby. The noise from the bar at the bottom of the lobby was so loud (laughing, shouting) I could not sleep until 2am. The next morning we requested to change rooms, to a quieter room, however they had no rooms available at the front of the hotel (quiet side) and moved us away from the lobby side. Night time noise: Unfortunately there were numerous nights where people were outside by the pool, smoking , drinking, laughing, screaming untill 3.30am! I called the front desk, as was told "its a hotel sir, what can we do". I actually went down in my PJs (2am) to speak to the staff member , he scoffed at my issue and asked "is the noise from this guy" whilst pointing to a random technical support staff member standing next to me. They take complaints from guests as an inconvenience, its all very cynical (when I raised more complaints) they pretend they have never had this as an issue before (i.e. noise). I am pretty sure they were amused and annoyed by my complaints. After multiple nights of poor sleep, I met with the head of security and customer services to explain my issue, they wondered what it is they can do if guests are by the pool untill 3am laughing , singing, joking. Incredibly , I had to explain that there are other guests sleeping. The head of security did not speak a word of English and everything was translated via the hotel customer relationship manger - It was all a ploy to pretend to solve the issue. As the same issue occurred again, I just took it on the chin at 3am the following night. Entertainment: The kids were so bored, the "mini club" consists of lego, crayons and other toddler related activities. They played this amazing game , where you bounce a tennis ball and have to catch it in a tennis ball tube, after 2 minutes of this you wonder if this is their best idea. I asked why the table tennis table was so WARPED and unplayable, the response was "it is ok, it not broken". Incredible! We spent our time in the indoor pool. The night music was mostly Turkish and Baltic type songs, only 3 songs were in English. The speakers were so loud for a small room. A part of the ceiling at the outside bar had fallen off, mouldy fridges, wooden flooring in the rooms was warped, WARPED table tennis table. Arcade: Excellent facilities here, however you’d better get EURO 20 – 100 EURO as a minimum as each game is 2 EUROs a go. Tenpin bowling is 37 EUROs, I mean it is cheaper in London to go bowling. Al La Cart restaurant: Good food but this is NOT included ( 40 EURO charge for 4 ppl). Which 5 star All inclusive charges for the Al la Cart? None that I have been to. Jet2 Representative: Listened to my problems and said the hotel management have said they “upgraded” your room due to the noise, and gave you 1 visit to the Al La Cart, so that’s it. Horrible treatment overall. The representative clearly had no influence at all and it was a waste of my time overall. Food: The hall is very big and plentiful choice, however as others have said it is repetitive and mostly the same every single day. Once the lunch closes (open from 12.30 to 2.30pm) after 2.30pm, you have nothing no pizza, no chips, nothing, other than days old mini cakes, bread rolls and ice cream at the patisserie. Also, you should note , the hotel has a huge Conference hall, so 3-4 times per week there were hundreds of guests from the conference coming in to the restaurant and at the bar so the staff are overwhelmed. The staff “workers” in the sky blue uniforms were run off their feet poor things, while the “managers” in dark blue , congregated 4 of them in some of the dinner halls, pointed at the rotor, and talking. I wanted to move hotels but the additional cost, time and hassle was too much including phoning the holiday package company to arrange. I have never been away and spent so many visits sitting complaining about the same issues day after day, They are fully aware of all of the issues, but they pretend it has never been raised to them. Complete JOKE, there is no appetite to improve or take on board feedback - just empty words of fake concern.