located in Kleopatra beach; it takes 1 km to Alanya center, 10 m to the beach, 118 km to Antalya Airport.Taxi and minibus are available for your transportation. This beach hotel is located close to Alanya city centre, just opposite Cleopatra Beach. Various shopping venues, bars and restaurants are to be found in the vicinity. A variety of nightclubs are to be found in the town centre, which lies within a 15-minute walk of the hotel. Local attractions include Alanya Castle, Alanya Dockyard and Arsenal, the Red Tower, Alanya Archaeological Museum and Damlatas Cave. 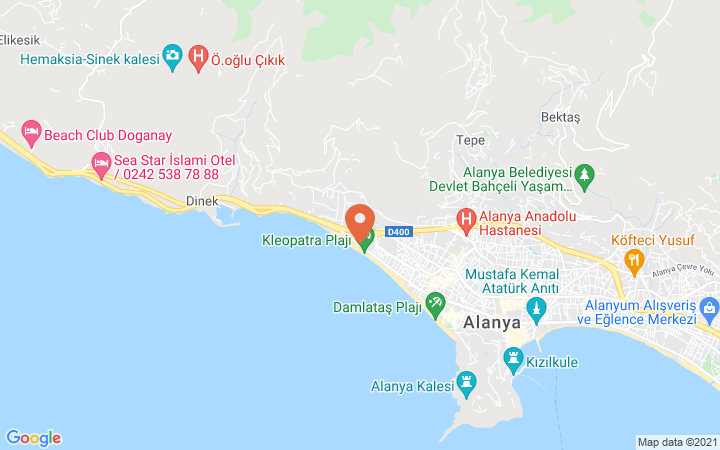 We stayed at this hotel in the second half of September. We lived for a week with meals - everything included. The location of the hotel is convenient, close to the beach, which is a big advantage. Everything was fine in the room - there was hot water, the air conditioner worked perfectly, and there was a small sprinkler. No noise was heard. The safe is paid. Food is good - eggs, pancakes and other dishes are served for breakfast. There are fruits and vegetables. The coffee machine is working. Carbonated drinks and local alcohol are available. for lunch and dinner there is a good selection of meat. We especially liked the dinners, during which various meats were grilled outside. There is a large shopping center near the hotel if you want to buy something, and there is also a souvenir shop nearby. Several evenings we watched a same woman belly dance, others a boy and a girl presented us with fur coats and jackets. For snacks, a local woman baked pancakes with 3 different fillings, they were very, very tasty. During the trip, I noticed that the internet only worked in the reception area, it was very, very slow. Although the meal type was all inclusive, we learned at the bar that cocktails cost extra. The pool water was cooler than the sea.

Good hotel, nice location and view from balcony. Really nice man in resturant - Mehmet, he can speak nice english and will help you in every move. Best worker in this hotel for sure. He can help you with everything.