The traditionally quaint village of Koutouloufari, located at the mountain's foot but only a short stroll from the beach and bustling Hersonissos, is a haven of tranquility and old-time Crete. Since our beginning, at the Galaxy Villas we have always strived to offer our guests a warm, original and relaxing vacation experience in this charming location. We cater to families, couples and the discerning solo traveler anticipating every need with a warm smile and the renowned Cretan hospitality spirit. The Galaxy Villas is tastefully built in the Greek island-style architecture, utilizing quality natural materials. We ensured that all villas enjoy beautiful, serene views of the ocean, the mountains and our gardens. The hotel's landscape features well groomed but home-style Cretan plants and flowers as well as organically grown olive trees and even our own organic vegetable and fruit garden in the picnic area! Of course we'll share our produce with you! If you want to experience a relaxing Cretan vacation, in a convenient, quaint location, excellent value for money and warm service with a smile, the Galaxy Villas is the ideal choice! ENJOY THE TRUE FLAVOR OF CRETE! 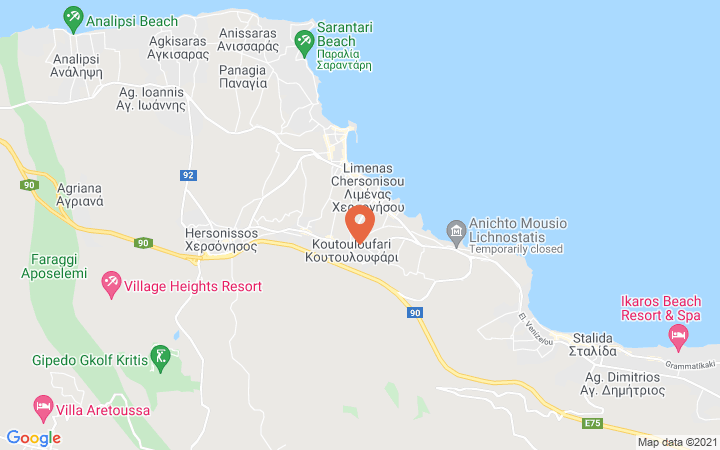 Right were to start PROs: Lovely village and surrounding areas As above good restaurants and bars in abundance Apartments - good enough for us (you get want you pay for and these served us well as on our recent holiday) - if you want high specification and not the "standard" Greek traditional apartments this is not for you - however as previous suited ourselves Gardens within complex - fantastic Staff superb from late arrival and through-out the holiday Food and bar area - well managed, good service and good food / drinks CONS: Electric's and plugs within apartment - a little dodgy Steps around apartments if you have mobility issues - no good for you (we haven't so no issues) Here's the killer - sun beds and bathing areas - poor very poor - the need to build another pool or bathing area here is required - you could have a nice pool where the back apartments are on the grass or even were the old train is parked up The need to manage the "towel" brigade - when others feel it's OK to turn up at 1215 and think they've put a towel on at 0800 or before is acceptable - I'm sorry you're having a laugh - the Management sorted it out on one day when we were there Pool is very deep - not really suitable for younger kids - though there is a lifeguard throughout the day - see point about bathing area / another pool Size of the pool doesn't really allow for the biggest UNICORN inflatables that people tend to buy unfortunately - hey ho whatever rocks you boat but not mine I'm afraid So whilst we had an enjoyable holiday at the Galaxy Villas (7.5 / 10) - would I go back again - I wouldn't I'm afraid based on the pool and bathing area issues whilst we were there - I just want to enjoy the holiday instead of worrying about sunbeds (many are broken - parasols as well) and being cramped in next to others - I want my own space with my family not with others literally 1m3 away and sometimes less I'm afraid I'm also glad we came away when we did as another review has stated - your own doughnuts and water I suggest is OK but taking your own cans and beer is taking the mick

Not as advertised, and not 4 star.

Just left Galaxy Villas in the beautiful Koutouloufari, Crete. After reading some reviews before we came, which we found useful, I want to give a balanced review now we've been, hopefully to help others. Firstly, the pros: Fantastic location for wonderful, friendly rooftop restaurants and fabulous shops selling local gifts. There's a small supermarket across the road selling a variety of good food and drinks if you're self catering plus holiday bits. Down the hill outside Hotel Bellevedere there are bus stops which go either way... toward Malia or Heraklion. The buses are fab! Well run and aircon! Phew! The cleaners are fabulous! Our room was cleaned daily (you have to ask for this otherwise it's only every other day ... reception are fine with you asking for daily cleans) to a good standard and sheets and towels were always crisp and clean. The complex is very Greek, lovely plants and pots with lovely views. Our room was spacious with two balconies and plenty of wardrobe space. The staff are friendly. The food is very nice. Aircon is payable separately but we knew this, both bedrooms had air con and worked well. Cons: I'm providing these to hopefully be helpful to Galaxy Villas aswell as new guests. .. Villas: if you're after sleek lines, polished floors, shiny new things then this place isn't for you. But if you're into traditional, typically Greek design with a "rustic" feel, the villas are ideal. Lots of things need fixing and they do need to refresh the rooms. Sunbeds: the vast majority of these are broken and actually dangerous (I laid back on mine and it collapsed flat almost catching my son's hand). They simply need completely replacing. There's not enough space round the pool area to satisfy demand which could be easily rectified by investing in more sunbeds laid out among the gardens. Guests could easily settle for the day on these and still use the pool. They could invest in a few outdoor showers dotted about for those who use the garden sunbeds. Then guests could refresh and there would be more room all round. Rules: the management need to decide what the pool rules are and stick to them. When we arrived, we struggled to get sunbeds as every one had left towels on them to 'reserve' them. After speaking to another family who'd been here a few days longer, they said "people put their towels out early". So, against our usual, fair judgement, we did this. We were a family of 4 but started by only putting towels on two beds to give others chance too. This worked fine until the last few days of our ten day stay when the rules changed and towels were removed by staff and dumped in a pile. Don't get me wrong, either rule would have been followed by us (we'd actually have preferred the latter!), but please Galaxy Villas, CHOOSE A RULE. In addition, on our first day, we saw posters up near the bar stating that only food and drink bought at the bar may be consumed round the pool area and bar. A reasonable rule and one we, of course, adhered to. We bought drinks and snacks at the bar (all lovely). But, again, this rule changed a few days before we left. Loud groups started buying lager cans at the shop and drinking these round the pool area. Ok, not a massive deal until a young child cut herself very badly on an empty lager can, requiring the lifeguard to grab the first aid while her little hand poured blood all over the pool tiles. Again, choose a rule. Overall, it's a wonderful place to stay and we had a fabulous time!