Wyndham Grand Crete Mirabello Bay is a luxury hotel on the north eastern coast of the Greek island of Crete. The hotel has its own beach, with activities including jet skiing, water skiing and pedalos available. There's also a PADI diving centre suitable for both new and experienced divers. The hotel has a garden with a sun terrace and two outdoor swimming pools, plus a heated indoor pool. There's also a gym and a spa with a sauna and Turkish baths, where you can book a massage and beauty treatments. A sports court offers football and tennis, and there's a dedicated section of the beach for volleyball. You can even try your hand at aqua aerobics. There are activities for children to do too, including a kids' club for those aged 4-12, a playground and a nightly disco. If you fancy a change of scene, the town of Aghios Nikolaos is within walking distance. This has its own sandy beach and a marina where you can enjoy food and drinks while overlooking Mirabello Bay. There are lots of shops here too, selling everything from clothing and jewellery to china and fabrics. You can also take a walk around the Voulismeni Lake.

The hotel's own beach is steps away, and you can also head to Kitroplatia beach, which is 2km away in the town of Aghios Nikolaos. From here you can travel to the small island of Spinalonga, which was a former leper colony and attracts visitors who come to see the ruins and learn about its history. A short drive from Dessole Mirabello Beach & Village is the town of Elounda, a former fishing village which retains much of its traditional Greek character. There are several beaches to enjoy here, and keen snorkelers can explore the sunken city of Olous just off Elounda's coast.

The hotel has five bars, including two by the pool and two on the beach. A buffet restaurant opens for breakfast, lunch and dinner, while three ala carte restaurants serve Greek, Italian and barbecue cuisine. You can dine alfresco in the outdoor seating space.

Dessole Mirabello Beach & Village has a darts board and table tennis, and hosts a programme of family-friendly light entertainment five nights a week.

The rooms have Wi-Fi, satellite TV and air conditioning, plus a balcony or terrace. Room service is available 24 hours a day.

This hotel is popular! Rated excellent by 2267 people on Tripadvisor 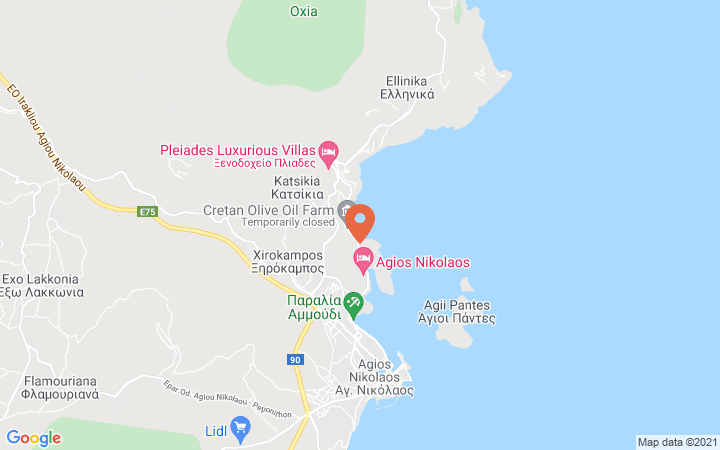 A nice break but could be better

The hotel itself was beautiful and all the staff were very helpful. We especially enjoyed the spa treatments and went back for more later in the week. The massage was amongst the best I have ever had anywhere in the world. The apartment however was more than a little disappointing. The furnishings were very basic and somewhat tired. Although the bedroom and bathroom were fine, the kitchen / living space we amongst the most disappointing of all places we have ever stayed. The "kitchen" was only a sink, a small free standing fridge and 2 ring hob. There was no cooker not even a microwave. There was plates, glasses and cutlery but no pots, pans, utensils etc. We had to go and buy washing up and cleaning items as none were provided. There was no table or dining chairs so it was a plate on our laps on the sofa that could not be moved. If you're intending to use the hotel's restaurants and bars then that's fine but if you're looking for somewhere to take a self catering holiday then keep looking or you will be very disappointed.

BEWARE! This is NOT a 5 Star hotel - The website looks stunning - the reality is very different.

I had a full body massage whilst on holiday at the Wyndham Grand in Mirabello Bay, Crete. The AegeoSpa’s team where providing the beauty treatments & massages. I was treated by Alex, & he was brilliant; I’ve never felt as relaxed. I’d highly recommend having this treatment