Ambre A Sun Resort is an adults-only hotel on the sandy shores of Palmar beach, on the northeast coast of Mauritius. It's a short drive from the centre of the popular resort village of Belle Mare. The hotel's buildings are typically Mauritian, with coconut thatch roofs, cream painted exteriors and the occasional arched doorway. They're set in flat gardens, covered in lawns, brightly coloured flowers and leafy shrubs. You'll have views across the turquoise water of the Indian Ocean from the hotel's palm tree-lined pool area. The hotel has an outdoor swimming pool, with poolside cabanas and a waiter service so you can order drinks from your sun lounger. If you're feeling energetic, you can have a workout in the hotel's gym or wander to the beach where you'll find a variety of equipment for water-based activities on offer, including pedalos, kayaks and stand up paddle boards. For some downtime, you can head to the spa where you'll find a variety of wellness and beauty treatments on offer, including candlelit massages and Ayurveda-inspired aromatherapy. You'll be able to dine at the hotel's three restaurants, with both buffet and a la carte options available. After dark, you can watch the evening entertainment, which typically includes live shows. High-speed Wi-Fi is available throughout the hotel to keep you connected.

Ambre - A Sun Resort Mauritius is 2.2km from Belle Mare, where you'll find a stretch of sandy coastline, lined with palm trees and hotels. It's also home to open-air cafÈs, bars and restaurant, along with souvenir shops. The hotel is 5.7km from the local golf course, which is set on a private island. Further afield, it's an 8.9km drive to Flacq, which is popular with shoppers because of its twice-weekly markets. They sell a variety of locally produced goods, including sarongs, handmade jewellery and fragrant spices. You can also visit the resort's shopping centre, with its boutiques and places to eat.

The hotel has two a la carte restaurants that are open for lunch and dinner. One of them offers a combination of Mediterranean and Mauritian cuisine, while the other serves Italian dishes. There's also an international buffet restaurant that's open for breakfast, lunch and dinner, and two bars serving soft drinks, cocktails, wine and beer.

At Ambre - A Sun Resort Mauritius you can attend a fitness class, such as aqua aerobics, or play a game of tennis, beach volleyball, pool or table tennis.

At Ambre - A Sun Resort Mauritius, bedrooms come with air conditioning and a mini fridge. You'll also have a TV with satellite channels and a safe.

This hotel is popular! Rated excellent by 8453 people on Tripadvisor 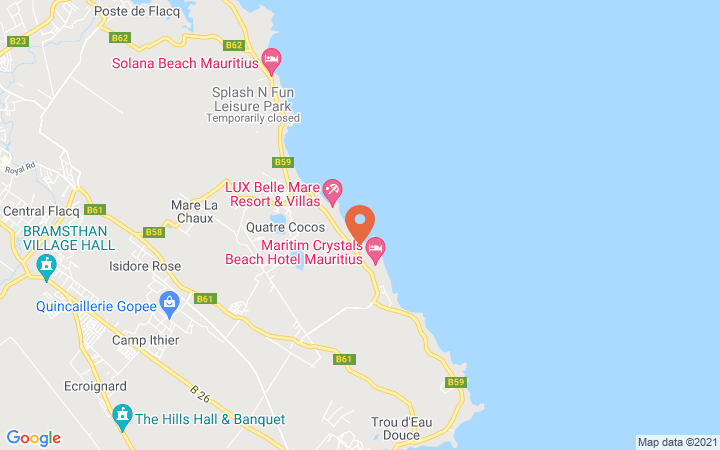 We have just been back from the best holiday ever. Booked at all inclusive package, we were allowed into all the restaurants.The hotel have a very nice view with turquoise lagoon and white sand. Food- Food was alright, no major complaints. Good service by Deena at Indigo. Always very attentive and every ready to help. Rooms- Rooms were a bit outdated but alright. Bar Service- Coral bar is always very very busy. The cocktails are lovely . Yash, the bar manager has always ensured that we are well looked after. Beside this, one should try a cocktail made by his hands. It is magical. Been to more that 2000 bars in the world, but have never ever tasted cocktails as he prepares it. He sticks to the originality of the taste. Good job. The bar has always been very crowded and i believe it is not easy to manage. But the team has neved let us down. Thank you Yash , for making our holiday such a hit Ti bar is a place to chill for a.sundowner cocktail. However there are few areas of improvement needed: 1) The should be a food menu for the pool . 2) The lighting in the pathways are a bit dimmed. Otherwise it has been a very good experience. The staff makes up a good holiday. Thanks you Yash & Deena. Will surely come back if you guys are around.

Amazing Holiday, due to the staff!!!

Arrived early on Saturday 7th, but did not get to the resort until midday, due to a nightmare experience getting through the airport! Once at the resort we were greeted with smiling staff, Deepak especially, who from this point onwards could not do enough for us. One small issue is that the hotel itself could do with some minor work in certain areas, as the rooms are slightly dated. The cleanliness of our room (836) cannot be faulted, ours was cleaned daily by Bobita to high standards. Food was plentiful all day and good choices each night, with a changed theme. Spent most days on the private beach with a 1st class service all day, thanks to Selven and Kelvin. The 5 island trip is worth doing, organised through Chris, who daily walks up and down the beach. Highly recommend the private day trip, visiting beautiful parts of the island including temples, waterfalls, snorkelling with dolphins and amazing views in the mountains, which we organised through Tresor, who also you will see on the beach. Avinash our driver was awesome and attentive, explaining everything about where we visited. Evening entertainment was different every night and decent, and we were looked after and served drinks by Siyam, who went above and beyond and could not do enough for us every time we seen him. All the staff were amazing.

Honest review… Is this a luxury hotel?