This hotel is popular! Rated very good by 2037 people on Tripadvisor

from £27 per person per night 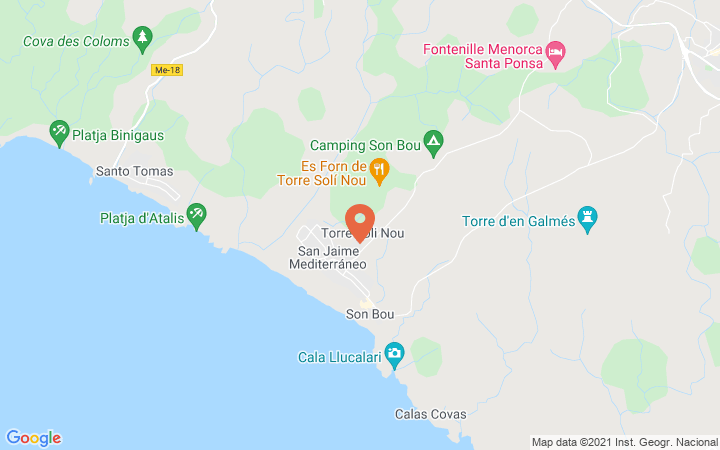 Young family half board

We have just returned from an 8 night half board stay here with my husband, mum and two toddlers. The best thing about this hotel is the staff - all friendly, welcoming and eager to help. The food was also excellent throughout with so much choice and the option to pay 4 euros for unlimited drinks with dinner was great value. The pool / facilities are clean and well looked after and we really enjoyed the entertainment. Son bou beach is also great for young children and we really enjoyed our time there. This is a very busy and fun hotel with lots going on throughout the day. We were really pleased we didn’t choose a sea view room as it was much quieter for children napping but my mum preferred this room as she could listen to the entertainment on the balcony. While the courtesy bus to the beach was helpful, it was very busy towards the end of the morning service and lots of guests piling on to it at 12.30 / 1 (people returning for lunch etc.) so it would really help if there were a few extra journeys around the middle of the day to ease that congestion before the afternoon bus break. The bus timetable is limiting so I’d recommend not doing anything less than half board at this hotel. It would also be hugely helpful to have a small shop on site for necessities for guests who are not all-inclusive and as mentioned a mini disco slightly earlier in the evening would work brilliantly. All in all we had a fantastic time at this hotel would certainly consider returning in the future.

Top hotel, but needs some fine-tuning to move the experience from good to excellent.

This is a really good hotel but there are some key things which would move it to a classification of ‘excellent’. I understand that hotel management teams read these reviews and often write polite responses. However, they rarely act upon the feedback. In this case, I hope they are able to make some changes as we would be keen to return. GOOD POINTS: So many, including… - The staff are excellent; friendly and professional. - The feel of the hotel is great; spacious and clean. - The food is superb! The show-cooking, in particular, is great. However, every course in the buffet is wonderful - even the pizza which appears at the end of the counter is amazing. - The manager/ director is always present and keeping an eye on things. He looks very pleasant and seems to get on well with the staff, which is good to see. - The shuttle bus service is good, and runs every 30 minutes. If there’s too many people waiting the driver makes a return trip, which is considerate. - The Entertainment is of good quality, even if it is a bit repetitive. Then again, it’s hard to please everyone. (Evening mini-disco required - see below) - Lots more positive things to say and you will hopefully not be disappointed. REQUIRED IMPROVEMENTS: - There is no longer a local supermarket close-by, as a small block of apartments was built in its place. As such, if you need a bottle of water you will need to make a trip to the town centre. The shuttle bus service between the hotel and the town/ beach runs from 9:00am to 1:00pm and from 4:00pm to 8:00pm. In light of the closure of the local shop, I believe the bus service should be extended to cover the early afternoon period. - Also in relation to the shuttle bus, but on a separate note, it would be good if the service continued until a bit later into the evening; possibly 10:00pm. This way, you could choose to stay longer at the beach, when it’s cooler, and have a drink/ meal in town before returning to the hotel a bit later. - The evening meal service doesn’t begin until 7:30pm. This suits many people - however, for those families with small children it would be good if it opened a bit earlier; say 6:30pm. As well as feeding the younger guests when they are most hungry, it would spread-out the guests in the restaurant and make it less busy in the core period. - There is a desperate need for a children’s mini-disco to be arranged in the early evening, for half-an-hour to an hour before the main entertainment begin. As a family hotel, I believe this is critical. In every other family hotel we have visited, there has been a mini disco which my daughter has absolutely loved and forms an important part of our holiday. Additionally, if the restaurant opened at 6:30pm/ 7:00pm and a mini-disco started at say 8:30pm, it would provide a natural flow for families with young children. There is some version of a mini disco in the children’s pool at about 11:30am, but I feel it just doesn’t cut it. We need a formal kiddies event every evening, where the girls put on their little dresses and the boys smarten up, and they can dance to the well-known tunes. The parents can then sit back and have a quiet-ish drink after their meal. - The metal fire hose cabinets in the corridors are positioned at child-head-height. They have very sharp edges and a child from another family cut his head quite badly on one of them. All edges urgently need foam or rubber protection attached/ installed. - The six private four-poster sun-beds at the edge of the pool need to be moved the the rear of the pool area as they restrict the view of children in the pool. It is important for parents to be able to keep an eye on the younger children when they’re swimming, and these ‘special beds’ are a hindrance. They cost €15 per day, and people lounge around on them for most of the day so do not need easy access to the pool. It seems as though the hotel is putting income before guest enjoyment, as you could probably locate 30+ standard sun-beds where these six four poster beds are positioned. Further, I think it could be a good idea for the hotel to reserve the beds closest to the pool for those with young children, so everyone’s needs are covered. - The hotel room walls are very, very thin. I could hear conversations with full clarity from the room next door. I’m not sure what can done about this as it’s a structural issue. However, they might be able to further insulate the room entrance doors? - Every morning, on the third floor, we could hear the two maids talking very loudly. It was often used as my alarm clock! Ordinarily, I would be up-and-about, but it’s important to give young children a lie-in in the morning, particularly if they’ve been up late at the entertainment. We cannot ‘burn the candle at both ends’, irrespective of how old we are. I would try to allow my daughter to lie-in until about 9:00am, to help her achieve 10 or 11 hours sleep, but this loud talking sometimes woke her up. When considered alongside the very poor sound insulation, it would be good if this can be addressed.

I was with my parents at this hotel and we were all three amazed at how perfectly everything works. From the cleanliness of the rooms, to the variety of food in the restaurant (with excellent quality), to the service of the bus that takes you to the sea. Friendly and kind people: the restaurant staff always available and smiling, the manager attentive to everything. Beautiful evening shows and some of the best atmospheres I've seen so far. If you want to be pampered, you can't miss Valentin Son Bou. Everything works perfectly. WOW. Kejsi B.