This pleasant hotel lies directly beside the local sandy beach about 6 km from the lively centre of La Pineda where guests will discover an abundance of shopping and entertainment venues. It is well worth paying a visit to the Universal Port Aventura leisure park, which can be found approximately 2 km away. This fully air-conditioned hotel comprises 8 floors with a total of 410 rooms. Guests have access to a fabulous pool and garden complex and facilities include a cosy bar and an air-conditioned restaurant. Each of the tastefully decorated rooms comes with a bathroom with a hairdryer, a telephone, air conditioning, central heating, a hire safe and a balcony or terrace. Guests can take advantage of the swimming pool in the outdoor complex. There is also a sumptuous breakfast buffet for guests every morning.

This hotel is popular! Rated very good by 1907 people on Tripadvisor

from £18 per person per night 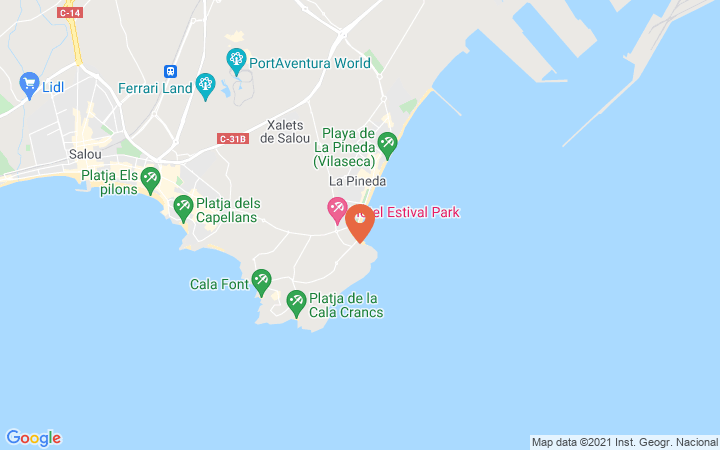 Outstanding hotel I cannot stay away.

The golden donaire is a fantastic hotel the location is perfect and right on the beach. I have been coming to this hotel for a while and each time I visit it improves, I have an autistic child who will not go to any other hotel other than the Donaire. The hotel is very clean, The rooms are spotless and cleaned daily, along with fresh towels etc, rooms have a fridge, TV's, a kettle and a safe. The Dining area is super clean and there is loads of choice for food. The entertainment team work very hard and are fantastic with kids. There is a long list of activity's for both adults and kids through out the day which will keep you entertained. The reception staff are amazing and are always willing to help where they can, Shout out to David you are my favourite "shhh don't tell the other staff" Indoor swimming pool is always clean and outdoor swimming pools are the spotless. Waiters during the night are super busy and are on the go all the time but are quick. Harris the TUI rep is super helpful. If you are looking for something close to the beach, super clean and family friendly all I can say is book it. To the staff at the Donaire see you in May

Good hotel, right on a fantastic beach, great food, but do make sure to request a quiet room if you dont want noise

POSITIVES - The hotel is a really nice hotel, clean, very friendly and helpful staff. Rooms cleaned each day, beds made, new towels (if you want new ones) - Views are good. Either of the sea or the area behind. Nothing blocking our views - Lots of food choice in the buffet, including new selections every day which is important so you don't get bored of it! I looked forward to eating more than anything else :) - Right on the beach, not even crossing the road. Step out of reception, few steps and you're on the beach - Fantastic beach! Plenty of sand space, and the sea is shallow for about 100m. I felt totally safe in it, and my children. We could go far out away from any crowds and still stand up. It was fantastic - Right next to bus stops - Close to shops and restaurants if you want nightlife outside - Don't know if its allowed, but the adult only Golden hotel next door has a great upmarket bar and evening entertainment (if you don't like the entertainment this hotel puts on - see negatives below) NEGATIVES - We don't like loud, tacky evening entertainment, so we never go. But our room was right above the evening entertainment area, so it was VERY loud in the evening. And it was awful, loud microphone shouting, karaoke one night, bingo, quiz, singing. Hate this stuff its awful. BUT If you like it, then its not a problem for you. We considered changing rooms but decided to put up with it, bought ear plugs. - Evening entertainment goes on late, latest was 23:45pm of very loud awful sound. So we could not sleep until after that, and we have young kids. - A couple of nights gangs of youths sat singing in the bar even later that this, no one told them to stop. I dont know if this is rare or often, it happened twice in 10 nights. - So if you dont like evening entertainment or loud people late in the bar, do ask for a room the other side of the hotel then it will be fine. It was our first such visit so we did not realise it would be like that. If like entertainment and plan on going to it, then you can take the rooms above it. They should plan this more, put people in the right rooms for the noise they like or not. - There was no nice inside bar. Only an outside bar, or inside "cafe" style bar, or a lounge. The lounge is quiet but nothing goes on in there, no music or other people, just sport on spanish tv channel. They could do more in that room, for people who dont want to sit outside (it was HOT!) and people who dont like loud tacky entertainment. - Room is very hot. The aircon was put on 0 degrees, on max power, 24 hours of the day and it was still just a bit too warm in the night. I do like a cool room though. And there was a heatwave (34 degrees or so) so maybe its OK other times or other people. I moved my bed so the aircon fan blew on me at night! It was nice then :) I can't think of any other negatives. The negatives do not make it a bad hotel, it was still really nice and we had a great time so I still give it a 4*. If I could give a 3.5* here I would due to the loud evening entertainment, and lack of nice inside bar. According to trip advisor, 3* is "average", 4* is "very good". Well, this was in between. It was just "good" I think. If we had a quiet room the other side I probably would have left a 4* "very good". I would be pleased to go there again, I would just ask for a quiet room the other side.

Couldn't get anything better

The rooms were cleaned everyday and the cleaners even folded clothes if you left them lying on the floor or your bed. The food from the bar is pretty basic as it should be, but the food from the restaurant is the most amazing food I must have ever had. The restaurant has a buffet that you can keep going up and getting food from. The staff are so nice and happy and make sure you are having a good time. If you are staying with TUI there is always a TUI representative in the hotel that will help you with any problems you are having. There is a go and fun club every night for the kids and later in the evening for the adults, they get magicians and acrobats to do shows and do little party's for the kids. Outside of the hotel has alot of shops to go and eat and buy lots of Spanish stuff. BUT there is also alot of people trying to get money by walking around the streets harrasing you to buy sunglasses, weed, hair braids, etc. (A person offered me fake ray bans for €70 and then when I said no he wouldn't let me walk away and then offered me weed and kept making deals). My advice if you do decide to go and walk around the town is to just ignore the people begging and only go into the shops to buy stuff. Apart from this I belive this hotel deserves more than 4 stars, the staff are just so amazing and happy and when you go there... it will be the most different hotel and lifestyle experience you have ever seen.