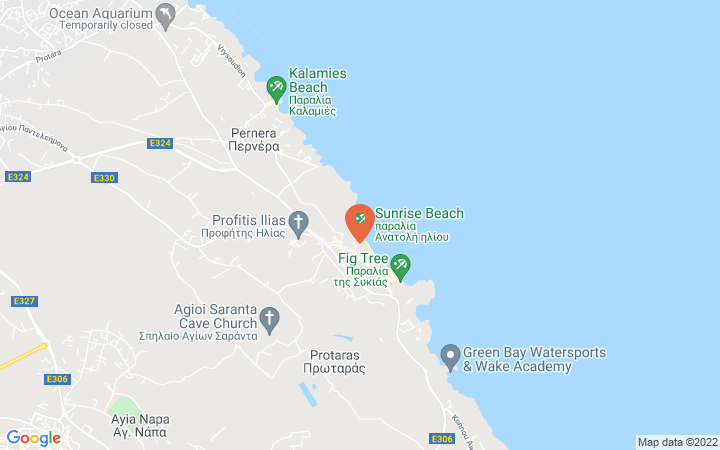 We ordered Kleftiko and Greek salad The kleftiko was completely unchwable. The Greek salad had something on it that looked more like yogurt than fettta . We told them politely that something was wrong, the waitress was very polite , but came back to reassure us that everything was fine in terms of ingredients. We left without eating anything, but paid the full bill. Note: The Perrier we drank was perfect!!!

Unfortunately I never got the name of the girl who works at the spa towel station, she was a complete pleasure to have met, we laughed every day (mainly about Christmas ).. only wished I'd gotten her name to thank her personally. A massive thank you from a very happy guest

Enjoyable holiday, disappointed at the hotel

I have stayed in a hotel near here and I thought it looked quite nice, plus I wanted to treat my mother and though staying at a 5* hotel for a bit of luxury would be nice for her, so when this hotel was suggested I booked it straight away on a HB basis for the 20th Sept. Let me begin by saying this hotel holds a lot of wedding as we discovered as we arrived in the mist of one, so when we arrived we didn't get any help, which was quite annoying as I had to leave my mother outside the hotel in her wheelchair while I struggled with a large suitcase up the steps, I suppose I should of gone in and insisted someone help us, but for a 5* hotel I thought this was quite bad. When we eventually got in we had some help then to our room, which was very welcomed after a long journey, This hotel is far from a 5* hotel, the rooms are a bit dated and I was really surprised a hotel that suppose to be 5* in this day and age still has the old fashioned shower over the bath, no offence to anyone who still has this. The rooms for a hotel of that supposedly calibre are adequate but a lot to be desired but you really have to make the most of it, they had tea and coffee making facilities, which is a nice welcomed touch. People have complained about paying for the fridge, which I think is disgusting, as even hotels with less stars give you free use of the fridge and normally put a bottle of water in it, especially for a country where the water is not that good for drinking, but saying that we did seem to have use of the fridge free as it had a key already in it so we could keep a bit of milk in there or some whipped cream, as I did for the odd baileys coffee I used to have before retiring for the evening. For a 5* hotel I didn't expect to pay for the safe though, it seemed for a 5* hotel you did have to pay out for a lot of things which you think would of been free. I agree with everyone who says this hotel does need a good refurbish, as yes the carpets are a bit worn as well as the peeling wallpaper, oh yes and there isn't any entertainment whatsoever, tell a lie there was at least one singer who was quite good, but that was only once a week, other then that its a children little disco, prob to ware them out, and then thats it. The food was repetitive, a help yourself buffet, but we found the best meal was the breakfast, buffet again but you got choice of a fried breakfast, a chat on hand to make crepes or omelettes, cereal, pastries, porridge, fruit, nuts, toast, yoghurtt and of course tea, coffee or fruit juice, all in all we liked the breakfast teehee. All in all this is not a 5* hotel it is more like a 3*, but saying this hotel is due to close this year sometime, so not quite sure what it will be like after this refub, but I do hope they up their standards a lot, perhaps having more friendly staff on reception will be a start, as for a hotel of that standard you expect this.