Sahara Beach is an All Inclusive hotel on a white sand beach in the Tunisian resort of Skanes, and offers activities such as jet skiing and diving. Here you can spend your day relaxing in the beach bar or exploring the harbour and fort of Monastir. Sahara Beach has gardens and a terrace, where you can sunbathe while the kids have fun in the hotel's water park. There are three outdoor pools and a separate kids' pool. Indoors, there's another pool which is heated. Two of the eight bars are outdoors, while one is adults-only. In the evening, you can go to the disco bar for entertainment, or take part in the hotel-organised quizzes and shows. There are four restaurants at the hotel, with either buffet options or ‡ la carte menus. For coffee and a treat you can stop by the cafés. You have a choice of sports including basketball, football or beach volleyball. The hotel has tennis and squash courts and mini golf. In the pool area there are aqua aerobics sessions, and the gym runs a timetable of fitness classes. The hotel spa has Turkish baths and a sauna. You could also book a massage or beauty treatment during your stay.

The beach in front of the hotel is popular for snorkeling and diving because of the clarity of the water. Sahara Beach has a mini market, but for a whole day of shopping you can walk into the resort of Skanes, where you'll find a mix of modern shopping centres and traditional souks. In Skanes there are also a few restaurants and bars. For a day out in a more bustling resort, you have Monastir 8km away. This historic town has lots of restaurants where you can try traditional Tunisian food. The resort has some night life, as well as a sandy beach and ancient fort.

All three buffet restaurants are open for lunch and either breakfast or dinner. The a la carte restaurant serves an international menu for lunch and dinner and there's a snack menu in one of the bars. There's either a kids' menu or children's buffet in each of the hotel's restaurants.

The hotel has a kids' club for ages 4-12. Staff run kids' entertainment such as beach games, and there's also a playground and games room.

The rooms at Sahara Beach are airy and simple. They all have a balcony and air conditioning. There's Wi-Fi access throughout the hotel.

This hotel is popular! Rated very good by 5090 people on Tripadvisor

from £20 per person per night 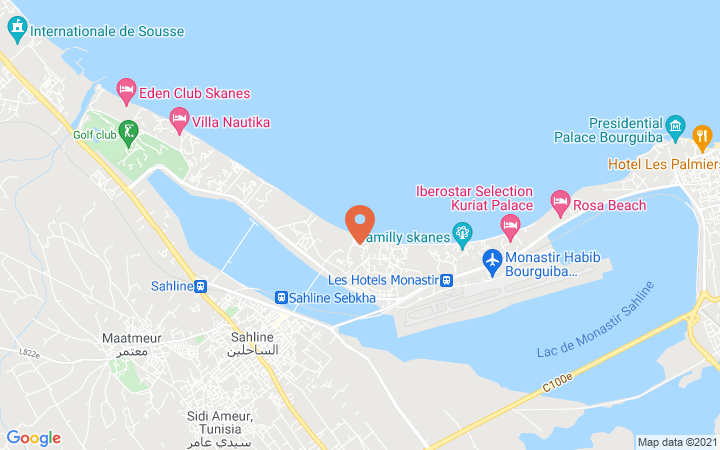 Firstly, having booked long in advance and then seen a number of awful summer reviews amongst the positive ones, we were in complete trepidation as to what we would find on arrival. We were so relieved to discover that the positive reviews were nearer the mark, and some of the negative reviewers really need to take stock of the wider picture when reviewing a hotel. Tunisia has been hit by a series of poor fortune over recent years which drastically reduced the number of tourists (2008 financial crash, 2015 terrorist attack, Covid and then recent political upheaval) which is only now finally recovering. Consequently, many hotels have struggled to keep the level & speed of reinvestment in facilities that would normally be the case, and there is 'some' evidence of this at Sahara Beach. However, there is clearly a recently introduced rolling programme of upgrades and this having a positive effect. Our room on the top floor was fabulous, modern, well furnished with a lovely bathroom and great views. Sure, some of the 'finishing' is not quite to European standards, but that would be very picky and unfair to impact the rating. The pools were excellent as were the outside bars. A couple of the indoor bars could do with upgrading, but I'll come to that in a minute. The restaurant was perfectly fine and the food varied between good and excellent for this type of All Inclusive hotel. On the subject of food, why oh why do I see so many reviews of this and other overseas hotels with the comment "not enough British food" - are you folks serious!! This hotel is in North Africa for goodness sake! Try and widen your horizons a little - could you imagine a Japanese tourist for example complaining that there wasn't enough Sushi available at a UK hotel? Utterly reidiculous! That said, in fact there were plenty of western style options, such as several pasta dishes every day, chips, burgers, quite frequently pizzas and I even saw fish-fingers for the kids on one ocassion. However, surely part of the joy of travelling abroad is to enjoy the total local experience including the food? In truth, in the main Tunisian food is delicious and those dishes were accompanied by a vast amount of different vegetable options and a truly superb salad bar, so why anyone could complain is beyond me! The pools were fabulous as was the lovely white sandy beach. The sea was clean, albeit with the odd bit of plastic washed up here and there but that is the fault of irresponsible shipping operators rather than the hotel. My only complaint to the hotel in this area is that the protected/cordoned off swimming area is ridiculously small in order to maximise the water sports operations such as parascending, jetbike, banana-boat etc none of which were of any interest to ourselves or a large number of other guests. I accept that a lot of tourists are happy to stay by the pool, but many guests choose a beach hotel in order to enjoy the beach and swim in the sea - Sahara Beach Management, please take note - the swimming area needs to be substantially expanded as this is in my opinion a major flaw in your offering. The staff were excellent with a friendly and helpful attitude at all times. The rooms were spotlessly clean, our only gripes would be that it was not possible to turn on the balcony light and the only wastebin was in the bathroom - one is needed in the living area/bedroom! Getting back to the earlier mentioned rolling upgrades. The rooms are largely done but there are some still to do apparently. The main areas needing attention are reception, a couple of bars, the main concourse and parts of the restaurant, but the management assured me that all of this is planned during the closed period between now and the 2023 summer season, so this hotel is going to go from strength to strength. Finally, to address one of the more worrying aspects of some previous reviews - the sickness bug! If those who previously reviewed and rated this hotel purely on the fact that some of their group had a tummy bug had just looked a little further afield before reviewing, they would have noted something important. I did look deeper, and it was clear that the immediate area was impacted in the summer by a significant bout of gastroenteritis! Many hotels had the same problem, and as with most of these bugs they are difficult to contain and spread like wildfire, but as was the case here, they peter out after a few weeks. I'm sure it doesn't help that some folk are particular silly, as they failt o sanitise correctly and also drink the tap water which all major guides list as inadvisable. However, we saw zero evidence of any such bug during our stay, and everything passed off without incident. Finally, please remember that this is a 3 star hotel, not 5 star, and in that regard it is superb value for money, and in truth is better than a number of 4 star hotels that I have stayed in. The upcoming upgrades will only enhance the hotel's appeal, and although we tend not to return to resorts or hotels (too much elsewhere to see and do), I would not hesitate to reccommend this hotel. I would like to have given it 4.5 stars as 4 is too low, but 5 would be too high given that I could nto honestly say that it was perfect as it should be to receive 5 stars. All in all a lovely holiday which was worth every penny!

Absolutely brilliant place, Sahara beach is the best holiday ever. We first came to this hotel in 2010, why it's taken so long to come back I don't know. But having come back it didn't disappoint, food excellent, pools excellent, staff excellent, how this hotel is only 3 star is anyone's guess, we went to Egypt in the summer in a so called 5star., the hotel in Egypt is nowhere near Sahara beach resort. We can't recommend this place enough. We'll be back in may .

More choice and flexibility for your dream holiday